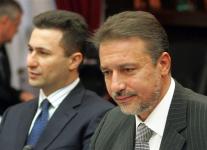 The attack against the independence of the Constitutional Court by the main ruling VMRO DPMNE party is “unacceptable”, Macedonia’s outgoing President, Branko Crvenkovski says.

Crvenkovski’s statement made Tuesday afternoon, referred to the reaction of the ruling ‘right from centre’ party on the Constitutional Court’s decision to annul their law allowing religious classes in primary schools.

“It is absolutely clear that we are witnessing a direct attack from the executive power on the independence of the highest judicial institution in the country,” Crvenkovski said.

On the same day, VMRO DPMNE made an official statement claiming that the Court was being indirectly run by Crvenkovski’s government, and that its decisions were “party and politics motivated rulings”. Several VMRO legislators also verbally discredited the Court.

Local Vreme daily, on Wednesday came up with speculations from unnamed sources that the ruling party was considering altering the law on electing Constitutional Court judges so that it could change them before their term ends in 2012.

The party was allegedly displeased over the recent annulment of several of its law provisions, that were pronounced as unconstitutional.

Before discarding the religious classes, introduced this school year, as going against the secularity of the state, the court also banned as discriminatory, the provisions for state subventions of giving birth to second, third and fourth children to only those who resided in municipalities with low child birth rates.

“This is an unprecedented pressure and an attempt to discredit the Court as the highest legal institution in the country”, the Court’s head, Trendafil Jovanovski, reacted yesterday.

The Court is yet to decide whether the government’s controversial plan to fund the building of a downtown church in Skopje, is in order, after a group of citizens took the matter to the judges.

Crvenkovski in his statement, accused VMRO DMNE’s head and PM Nikola Gruevski for “totalitarian rule” and for dividing the people.

“The division of patriots and traitors, revivalists and reactionaries, … believers and non-believers, has reached its peak now by imposing the choice – obedience to Gruevski or respecting the Constitution of the Republic of Macedonia,” Crvenkovski said in his statement.

He is to leave office on May 12, and is expected to return to his old post as opposition leader of the ‘left -from-centre’ Social Democrats.