Macedonia: Pressure Against Court Must Stop 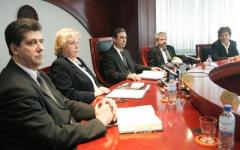 Government pressure against the country’s Constitutional Court must stop as it jeopardizes Macedonia’s progress towards the EU, political commentators cited in local media warn.

They say that by attacking the latest court’s ruling to uphold a ban on religious teaching in high schools, the government led by the right from centre VMRO DPMNE party is interfering in the work of the judiciary, a point that will not go unnoticed by the European Commission when it assesses the EU candidate’s performance this fall.

After the Court ruled against the VMRO DPMNE supported law, the party attacked the court for taking “politically motivated” decisions and for acting as the extended hand of the outgoing President Branko Crvenkovski who is soon expected to rejoin opposition ranks.

Several religious and student associations have since staged protests in front of the court. The latest staged on Tuesday came from the Student’s Parliament at Skopje University.

Asked to comment, Krisztina Nagy, spokesperson of the European Enlargement Commissioner, Olli Rehn, on Sunday told local media that the Commission is closely following the development concerning the independence of the judiciary “which is clearly a crucial issue” for the country.

“These notes could refer to the rule of law and respect for the constitution. The government now must respect the Court’s Rulings,” law professor at the Skopje University, Renata Deskoska told the Vreme daily on Tuesday.

Justice Minister, Mihajlo Manevski claims the attacks on the Court have come from political parties and individuals and not from the government.

“The Court’s decisions are final and executable and the government will surely respect them. Its rulings may be criticized in different ways but that does not mean that we interfere in its work,” Manevski notes.

Still, local media report that religious classes in schools continue even after one week has passed since the Court’s ruling was published.

Constitutional law expert Pance Dokuzov has argued that any obstruction of the Court’s rulings represents an attack on the constitution itself.

In October this year the European Commission will publish a report on the country’s progress towards EU accession. In it the Commission can recommend a start date for Macedonia’s accession talks.

Commissioner Rehn has highlighted three key benchmarks that the country must fulfill by that time, of which independence of the judiciary is one.