UN: Secularism in Macedonia at Risk 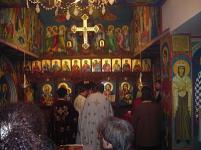 The two largest religious communities in Macedonia are so powerful they could breach the state’s constitutional secularism, a UN official visiting Skopje said on Wednesday.

The Macedonian Orthodox Church, MPC, and the Islamic community have a substantial influence over Macedonian politics, the special reporter on freedom of religion and belief for the United Nations Human Rights Council, Asma Jahangir, told local press.

She mentioned the latest wave of protests against the Constitutional Court’s ruling to ban religious teaching from high schools as an example.

“It is of vital importance to respect the independence of the judiciary and the ability of the courts to make rulings on religious issues without fear or putting somebody in favorable position,” Jahangir said.

Her findings will be added to a report on the situation in Macedonia to be put before the UN council.

During the past two weeks, the ruling conservative VMRO DPMNE , which wanted to introduce religious teaching, blamed the constitutional court for making a “political decision” and conspiring with the country’s left wing opposition.

After this, a series of accusations from various religious and student organisations followed. Yesterday the student’s parliament of Skopje University was the last to stage a protest in front of the court.

The MPC also condemned the ruling. Archbishop Stefan said in an interview that the church will lobby for “all obstacles standing in the way of the religious classes to be removed”.

Local media interpreted this as an open call for changing the constitution, which prohibits religion from interfering with the state.

Despite the controversy, the government said it is also committed to building a church in Skopje’s main square. The plan is also to be ruled on by the Constitutional Court, which will decide whether the state can finance religious buildings.

Macedonia’s biggest religious community is Orthodox Christians. Most ethnic Albanians, who make up one quarter of the population, are Muslim.