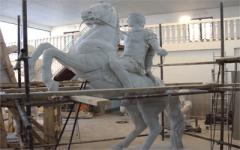 The statue of Alexander the Great, that will be erected in the city’s main square and show the ancient warrior king riding his horse Bucephalus, will be 12 metres tall. Together with the 10 metre high pedestal on which it will be placed, the whole statue will reach 22 metres.

“There has been a fuss made in the public as if we are doing a terrible damage to the state,” said the Skopje’s central municipality Vladimir Todorovic in a press conference late Monday.

”I regret this. The monuments are marvelous, fascinating. We will have something to be proud of in two or three years,” he added.

The mayor was forced into holding the press conference after local Dnevnik newspaper on Monday said it was in possession of documents detailing plans and costs for the statues.

It said that Fonderia Artistica Ferdinando Marinelli, a well known artistic foundry located in Florence, Italy, has been secretly hired to make the statues, and has been asked to keep quiet over the deals signed in 2008 with Skopje’s central municipality that ordered the monuments. The papers said it is in possession of five deals that bind both sides to secrecy.

The erection of the monuments has been highly controversial due to their estimated high cost, but also due plans to erect the figure of Alexander the Great, whose origin is the subject of a bitter dispute between Skopje and Athens.

Given that Greece blocked Macedonia’s entry into NATO and threatens to do the same to the country’s EU membership bid due to the dispute between the two countries, many locals say that this monument will only provoke additional tensions.

Skopje’s central municipality has repeatedly avoided going into details of the plans, and had not given any details of cost.

The opposition Social Democrats have accused the government and the municipality of lack of transparency when spending public money, but at Monday’s press conference Todorovic claimed everything was in order.

He told journalists that the statue of Alexander the Great will cost 4.5 million euros and is expected to be erected by early 2010.

He also outlined plans for four five metre tall bronze lions that will be placed on the sides of the bridge Goce Delcev near the government building, that will cost nearly three million euros.

He said that the municipality will pay 1.6 million euros for horse mounted statues of Nikola Karev, Goce Delcev and Dame Gruev, Macedonian revolutionaries from the beginning of the twentieth century. Two of these statues will be put in the main square as well, with the other will be placed in front of the parliament building.

Statues of the late tenth and early eleventh century sovereign, Tzar Samoil and that of Metodija Andonov Cento, the first Macedonia president will also be erected.

However, the ordering of other statues will be temporary postponed since the government has had to cut spending citing knock-on effects of the world financial crisis, said Todorovic.

Fonderia Artistica Ferdinando Marinelli’s work include the Holy Door of Saint Peter’s Cathedral at the Vatican, the Monumental Stairs of the Vatican Museums, monuments for the US Department of Defence, the monumental horses at the Arlington Memorial Bridge in Washington and many others.