US Congressmen Petition For Macedonia 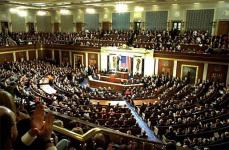 Fifteen US Congressmen have sent a letter to the US Secretary of State, Hillary Clinton calling for a speedy and just resolution of the long running name row between Athens and Skopje.

The congressmen urge the US administration to review Macedonia’s role in contributing to the stability in the southern Balkans, its support to America’s foreign policy efforts and ask the administration to give greater priority to solving the issue, reports the daily Utrinski Vesnik.

“The United States must continue to encourage Greece and Macedonia to sit down together and agree on a common path forward for peace, reconciliation and partnership in the development of the southern Balkans,” the congressmen led by Bill Pascrell of New Jersey and Mark Souder of Indiana, wrote in the letter which was sent Monday.

In April, last year, Athens blocked Macedonia’s entry into NATO, saying the country must first change its name, and threatens to do the same for Skopje’s EU bid.

“We look forward to working with you in the future to reach a speedy and equitable resolution on issues such as the name dispute so that there can be stability, prosperity and equity for all the region’s peoples,” the letter reads.

The congressmen said that Macedonia has proved to be one of the US’s most trusted allies in achieving its goals in the Balkans and elsewhere, reminding the Secretary of State that Macedonia has sent troops to Iraq and Afghanistan to serve alongside US troops.

The US has recognised Macedonia’s constitutional name and President George W. Bush’s administration went to great lengths to persuade both sides to agree to a solution.

For a while, UN sponsored talks between the two countries intensified, but have since ground to a standstill due to elections in both countries.