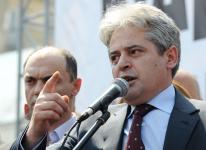 The leader of the ruling ethnic Albanian party in Macedonia has called on the government to focus on efforts to find a solution to the ongoing name row with Greece.

Ali Ahmeti, leader of the Democratic Union for Integration, on Sunday also warned the government against stirring up tensions between Albanians and Macedonians in the country.

The two issues are seen as interlinked, as the country’s Albanians, are strongly in favour of Macedonia joining both NATO and the EU, and are growing impatient over the unresolved row.

At the same time, Ahmeti sought to quell demands for a new deal between Macedonians and Albanians, saying the Ohrid Agreement that ended the 2001 conflict is a good deal, but its implementation needs to be sped up.

“In these moments when Macedonia decides on more important issues, there are no grounds for a new deal between the Macedonians and Albanians,” Ali Ahmeti told local media.

The opposition Democratic Party of Albanians, DPA Menduh Thaci last week implicated that the 2001 Ohrid peace accord which ended the Albanian insurgency by granting them greater rights is practically dead.

The peace accord, signed by the country’s main parties and sponsored by the West is seen as the cornerstone for modern multiethnic Macedonia. It stipulated the inclusion of Albanians into the state bureaucracy and security forces, granting them more liberal use of their ethnic symbols.

Rufi Osmani, the charismatic mayor of the Gostivar municipality, who recently announced the forming of a own party, has also urged for a new deal.

“If the country continues its standstill regarding NATO on the longer run, there is no such deal that could iron out relations between Macedonians and Albanians” law professor at the Skopje University and a presidential candidate of the March polls, Ljubomir Frckoski told to local A2 TV.

Frckoski participated in the draughting of the Ohrid Accord as adviser to the then Macedonian president.

Opinions polls show that the Albanians, as opposed by Macedonians, are more ready to accept a compromise on the name in exchange for a swift NATO accession. Observers warn that their impatience will only grow if DUI’s larger government partner, VMRO DPMNE fails to strike a deal with Greece.