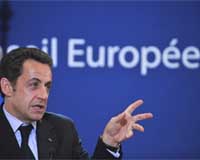 Several European companies including France’s GDF Suez, Enel from Italy and E.ON from Germany have expressed an interest in the contract to build Romania’s second nuclear plant.

During a working lunch with President Traian Basescu, Sarkozy offered “France’s cooperation, its expertise and that of its companies” to build a reactor that would go online in 2020, the French presidency said.

Basescu, whose country joined the European Union five years ago, told Sarkozy that “European-made technology” would be chosen for the project, according to the Elysee palace.

Romania’s only nuclear plant at Cernavoda was designed with Canada’s CANDU reactor technology and built under the former communist regime of Nicolae Ceausescu.

Sarkozy has actively promoted sales of French nuclear reactors abroad since taking office in 2007 and holds up France’s current network of 58 reactors as one of the safest and cleanest in the world.

Basescu, who won office in 2004 and led Romania into the EU, was in Paris for a two-day visit following Sarkozy’s trip to Bucharest last year for the signing of a strategic partnership between Romania and France.