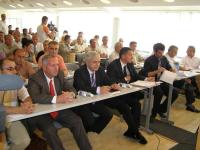 Participants in the ongoing dialogue between Albanian political leaders and Serb representatives in South Serbia assess their talks as ”constructive”, expressing hope that disputed issues will be resolved soon.

Talking to Balkan Insight, Nedad Djurdjevic, director of the Coordination Body that was established in 2000 to resolve grievances between the two communities, highlighted the previously tricky topics related to the integration of Albanians into state institutions and said this will be resolved soon.

“Albanians will soon be represented in the services of the land register, tax management, customs and other state bodies. We plan to organise a training in Belgrade for those who apply for these jobs,” he said.

After the Coordination Body’s Assembly on Tuesday in Bujanovac at the border with Kosovo and Macedonia, also attended by Cameron Munter, the US ambassador to Belgrade, and Hans Ola Urstad, head of the OSCE mission to Serbia, participants agreed to open an office of the republic’s ombudsman in southern Serbia.

Responding to objections from certain Albanian leaders who were not satisfied with the amount of public money Bujanovac, Presevo and Medvedja, the multiethnic municipalities in southern Serbia, are getting, Djurdjevic explained that due to the re-balance of the state budget, all users had their funds cut by 26 per cent.

“Our basic goal should be economic development and integration of Albanians into state institutions, which we especially insist on,” said Kamberi, who is also mayor of Bujanovac and an official of the Party of Democratic Action, led by Riza Halimi, the only Albanian MP in the Serbian Parliament.

The main goal of this agreement signed in March is, along with economic development, the integration of Albanians into state bodies and institutions, as well as inclusion of local Serbs in the authorities in Bujanovac and Presevo.

“We ask that the universal principle of multi-ethnicity be respected, and not that government representatives demand from us to include Serbs in local authorities, while the integration of Albanians into state institutions is being constantly postponed,” said Kamberi.

“I expect the things related to this issue to start happening after this meeting. That is, after all, the government’s obligation, since it verified the Agreement,” he added.

The Party of Democratic Action, with another two Albanian parties, formed the ruling majority in Bujanovac after the elections in May 2008. Serbs did not accept the offered positions of the deputy assembly speaker, two seats in the municipal council which has eleven members, two managing positions in the municipal management, and a position of deputy mayor.

“That offer is still on the table and we expect to resolve all the disputed issues with Serb representatives. However, I repeat, we insist on the universal principle of multi-ethnicity,” said Kamberi.

The Coordination Body was formed in November 2000, at the beginning of armed conflicts in southern Serbia, between Serbian security forces and Albanian insurgents. The conflict, which lasted six month, ended through the mediation of NATO and the international community.