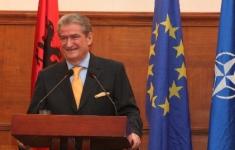 The Albanian government has come under harsh criticism from the opposition after an EU progress report said Tirana is not as close to fulfilling requirements needed to liberalise the visa regime as some of its neighbours are.

According to the report Albania and Bosnia and Herzegovina have so far failed to fulfill the requirements.

Montenegro and Macedonia have mostly fulfilled the requirements, while the status of Serbian reforms is still uncertain.

“The Berisha government has also failed to fulfill the standards regarding human rights, especially for minorities like the Roma,” he added.

According to Bushati the government is responsible for the conflict that they have created with the general prosecutor’s office, hampering the fight against corruption and organised crime.

Former Prime Minister Ilir Meta, now the head of the Socialist Movement for Integration, LSI, has also criticised the government.

“The EU has clear standards, which it has set forward for the visa liberalisation process,” said Meta

“There is no harsher strike to the clientelistic practices of the Berisha government than the EU answer, which says that the visa liberalisation process is a question of standards and not political lobbing,” he added.