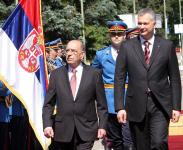 “This is the consistent stand of the Republic of Cyprus and one that we advocate in the European Union,” Papacostas said at a news conference in Belgrade after formal meetings with Serbian Defense Minister Dragan Sutanovac.

Papacostas underlined that Cyprus fully supports the Serbian path toward European integration and that this issue is completely separate from the issue of Kosovo.

“Serbia is part of Europe and should be a member of the European Union if it wishes so,” Papacostas said.

“Cyprus is the only country in Europe that is under occupation,” Papacostas continued. He claimed it was being occupied by Turkey — another country that wishes to join the EU.

He also added that his government is dedicating resources and energy to resolving this longstanding conflict through negotiations with the Turkish side.

Sutanovac announced that “Cyprus and Serbia are sharing the security risks and threats” and thus, by the end the year both countries are planning to sign a defence cooperation agreement.

Slavica Djukic-Dejanovic, Serbian Parliament Speaker met with Papacostas and agreed that Serbia’s integration into the European Union is a matter that needs expediting and is of greatest political importance for the EU when considering the Western Balkans.