War Criminals May Serve Out Sentences in Slovenia 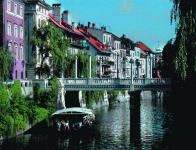 Convicted war criminals in the Hague could serve their sentences out in Slovenia.

They met to finalise plans for phasing out the court’s work and close all cases by the end of 2013. Tuerk praised the Hague Tribunal and Robinson’s work, and offered Slovenia’s full support for future plans.

Robinson also spoke to reporters about the recent and controversial footage of Ratko Mladic released by Bosnian FTV and stated that he did not have any new information about Mladic’s whereabouts.

“In case they are not arrested before closing of the Tribunal, the UN Security Council is presently working on setting up of a permanent mechanism that shall make possible that the remaining war crimes suspects still at large are put on trial,” Robinson said. He stated that the trial against Radovan Karadzic will begin in September this year.

Robinson also refrained from making any clear statements on the ongoing trial of former Hague spokeswoman Florence Hartmann, claiming it would be inappropriate to comment while the process was still ongoing.

Slovenia’s Justice Minister Ales Zalar and Foreign Minister Samuel Zbogar had a chance to speak with Robinson about the court’s work — focusing on issues linked to referring new cases to domestic courts and outlining the states’ overall cooperation with the Hague.

Zalar and Robinson also spoke about the possibility of convicted Hague war criminals serving out their sentences in Slovenia. Slovenian Ministry of Justice declared that if such a move is to be approved, special agreements would have to be negotiated and signed, based on the ones currently existing between the UK and Sweden.