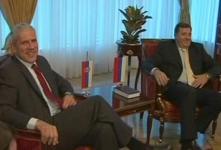 The recent visit of Serbian President Boris Tadic to Banja Luka, the seat of the Bosnian Serb leadership, continues to draw strong criticism from other Bosnian leaders.

“Tadic is reneging on the Dayton agreement,” leader of the strongest Bosniak (Bosnian Muslim) Party of Democratic Action, SDA, Sulejman Tihic, said in a front-page interview in the Sarajevo daily Oslobodjenje on Wednesday.

Western diplomats told Balkan Insight that even if Tadic had intended to soothe tensions in Bosnia with his visit, the effect has been the opposite. With his mixed messages, confusing attitude and obvious disregard for other national leaders in Bosnia, Tadic has not only added fuel to internal tensions, but has also risked relations between Bosnia and Serbia, they said.

Most Bosnian leaders criticized the fact that Tadic’s visit circumvented usual diplomatic procedures, which oblige foreign leaders to go through the country’s Presidency and Foreign Ministry. An even greater uproar was triggered by the fact that Tadic met with only Bosnian Serb leaders. Bosniak and Bosniak Croat representatives in the Republika Srpska government, not to mention those in the Federation entity, were completely ignored.

In his written statement to media, vice president of the Social Democratic Union, SDU, party Miro Lazovic, said that Tadic’s visit was a continuation of the policy of the Bosnian Serb wartime leader and top war crimes suspect, Radovan Karadzic, aimed at the creation of an “exclusive territory of the Serb people.”

During his visit, Tadic snubbed the decision of Bosnia’s High Representative Valentin Inzko to abolish disputed conclusions of the Assembly of the Serb-dominated Bosnian entity of Republika Srpska. Yet he also urged Bosnian Serb ruling and opposition parties to avoid further escalation of tensions and new clashes with the international community.

The disputed May 14 Assembly conclusions call for the Office of the High Representative, OHR, to stop using its governing powers in the future and to undo previous decisions. The OHR deemed this document to be in violation of Bosnia’s constitution and a challenge to the OHR’s authority.

Over the past couple of years, the international community has hoped that Tadic would prove to be the main mechanism for controlling and calming the increasingly radical Bosnian Serb leadership, and that Serbia could finally become a key for long-term regional stability.

This was reportedly one of the key messages to Serbia and its president during last month’s visit of the US Vice President Joseph Biden to Sarajevo, Belgrade and Pristina.

Yet Tadic’s visit to Banja Luka on Monday, despite his repeated guarantees of support for Bosnia’s territorial integrity, triggered new ethnic tensions and political criticism in Bosnia, and threatened to strain anew relations between the two countries.

“Tadic’s statements are contradictory. He calls for the respect of the Dayton agreement while at the same time he is denying it,” Tihic told Oslobodjenje.