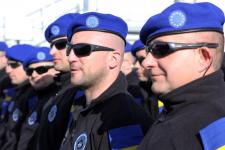 The main cause of protest is aimed against introducing customs checkpoints at the Jarinje and Brnjak administrative crossings with central Serbia.

Protesters announced to reporters of Serbia’s Tanjug news agency that the roads block would continue as long as the European Union mission, EULEX, failed to reverse a decision introducing new border controls at the administrative line with Serbia proper.

The local Serb population of northern Kosovo not have Belgrade’s official support for the protest.

Goran Lazovic, Leposavic municipality deputy chief, told the agency that on the main Leposavic-Raska road, a full-day blockade for all EULEX vehicles could be expected.

Last week, EULEX denied claims that its officials were collecting customs fees at the said crossings, stating instead that they had only increased security by introducing new measures aimed at countering smuggling activity, including the registering of all transported goods.