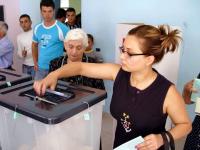 With only a hundred ballot boxes still left to be counted, the right-of-centre coalition led by the Democratic Party of Prime Minister Sali Berisha was running neck-and-neck with the opposition Socialists led by Tirana Mayor Edi Rama on Wednesday in Albania’s tightly fought parliamentary election.

The process of counting the last ballot boxes in some areas has moved slowly, blocked by disputes between both camps, which traded accusations of cheating throughout Tuesday.

With unofficial results now in from 4,659 out of 4,753 polling stations, the Socialists led overall with 40.91 per cent, trailed by the Democrats on 40.01 per cent. The Socialist Movement for Integration, LSI, was coming third with 4.81 per cent.

The Democratic Party’s coalition, the “Alliance for Change,” has so far won 70 deputies, ahead of the Socialist coalition’s 66 deputies and the LSI-led coalition’s four deputies. However, although it is ahead, Berisha’s coalition does not quite have the 71 deputies needed to form the new government in the 140-seat assembly.

As ballots are still being counted, the situation could yet change, with one to three mandates moving from one party to another. Whichever bloc emerges winner will almost certainly have only a small majority in parliament. Commentators believe that once the count is over, the blocs will try to woo MPs from each other in a phenomenon nicknamed “deputy trafficking.”

Three exit polls published after the voting closed gave a significant advantage to Berisha but that does not seem to have materialized now the ballots have been counted. The elections have been peaceful and calm, with only minor technical incidents reported. International observers have concluded that they saw “marked progress” this time round compared to Albania’s previous elections.