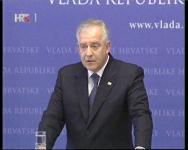 Ivo Sanader, the Croatian Prime Minister has called a press conference, currently underway, without offering any advance agenda. At the conference he announced his resignation and said that he was leaving politics for good.

The main state television station, HTV reports that an unscheduled HDZ parliamentary association meeting was held in parliament this morning, with nearly all ministers present. The press did not see premier Ivo Sanader or the vice-president of the Croatian Cabinet Jadranka Kosor, but they were later noticed whilst walking through the basement hallways to the small meeting room.

As yet the reasons for his resignation are unclear, but speculation ranges from sickness of a close family member to a breaking scandal connected with government tenders.