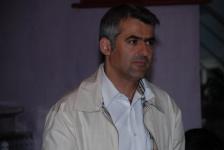 The Union for Human Rights, PBDNJ, which represents the ethnic Greek minority in Albania, rejected on Thursday speculation that it will return to the governing coalition of Prime Minister Sali Berisha after Sunday’s parliamentary elections.

“We will not change our position,” said in a press conference, the party boss Vangjel Dule. “Our trait has always been loyalty, integrity and coherence in decision-making,” he added.

PBDNJ has ruled with Berisha’s centre-right government for the last four years but internal rifts before the elections pushed them towards a coalition with the Socialist Party headed by Tirana mayor Edi Rama.

The party made a poor showing in the elections, winning only one parliamentary mandate.

Unofficial results from Sunday’s poll show that the Democratic Party’s coalition, the “Alliance for Change” has so far won 70 seats in the 140-seat assembly, ahead of the Socialist coalition’s 66 deputies, which includes a deputy won by PBDNJ. Third came the coalition headed by the Socialist Movement for Integration, LSI, with four deputies.

Final official results from the Central Electoral Commission are expected on Friday, after the counting by commissioners of several disputed ballot boxes.

Berisha needs one more deputy to secure a parliamentary majority of 71 deputies in the national assembly and has declared that he is open to expand his coalition, while presenting himself as the winner of the poll.

“It was not a wide victory, but it was victory, and whatever small or large victories shine,” he said during a press conference on Thursday.

The LSI has hinted that it could act as a kingmaker for a right-wing government but has said that a settled political decision on its part will be taken only after the results are made official.

The LSI, a splinter party from the Socialists, tried repeatedly to cooperate with Rama before the elections but its overtures were rejected bluntly by the Socialist leader.