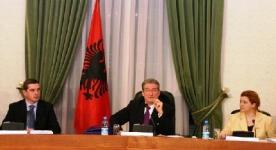 The Albanian government decided on Tuesday to slash the pension age for miners from 65 to 60-years-old, following an electoral promise from Prime Minister Sali Berisha.

Last July, for more than three weeks, a group of miners held a hunger strike in the capital Tirana. A series of strikes and protests were also held by miners around the country.

Their main requests involved a new labor status, according to which they would enjoy supplementary pensions.

The miners union had formerly accused the centre-right government of Prime Minister Berisha of turning a deaf ear to their requests.

However, in the electoral campaign ahead of the June 28 elections, both the opposition Socialist Party and Berisha promised to shorten retirement age.

Dozens of miners have lost their lives in various accidents in the last few years in Albania. Most of the incidents occurred in the Bulqiza chromium mine, in northern Albania, which is the largest in the country.

Chromium is Albania’s biggest mineral resource, and is one of the country’s main exports. In 2007, Albania exported more than 130 million euros worth of chromium.

However, exports have fallen in the last year due to the global financial crisis and a subsequent lower demand for commodities.