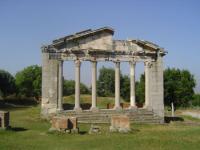 raiders who attempted to open a series of graves in the ancient city of Apollonia on Sunday.

The raiders, who remained unidentified and are suspected of being part of regional ring that smuggles artifacts, aimed to plunder a group of 2000-year-old graves, local broadcaster Top-Channel TV reported.

The archaeological park of the ancient city of Apollonia is located only eight kilometres outside the city of Fier, and has been the repeated target of thieves.

The theft of antiques, which became rampant in the 1990s as Albania struggled through a period of anarchy and lawlessness following the collapse of a series of pyramid-like investment schemes, has been curbed in recent years.

However, due to the large number of archaeological sites in the country, thefts have continued to be a problem.

“Antiques that are stolen from museums are documented and sooner or later they will emerge in the international market; however, those stolen from archaeological sites directly remain undocumented and lost forever,” Lorenc Bejko, a rescue archaeologist and former director of the National Institute of Monuments, told Balkan Insight.

The ancient city of Apollonia is one of Albania’s main archaeological sites. Established by Greek settlers in the 7th century B.C., the city reached his heyday during the 4th – 3rd centuries B.C., as one of the most important cultural and trade centres in the Mediterranean.