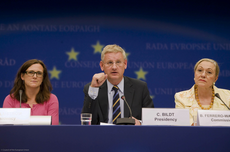 BRUSSELS – Moldova will have better chances of access to EU projects and international loans if authorities organise proper elections on Wednesday (29 July), the EU has said.

“We don’t want to see a repetition of what we saw in April and we hope that Moldovan authorities will use this occasion to demonstrate that they are able to move forward on the overall European agenda that we share,” Swedish foreign relations chief Carl Bildt said after a meeting of EU foreign ministers in Brussels on Monday.

Violent street protests and a brutal government crackdown followed parliamentary elections three months ago after the anti-Communist opposition claimed the vote was rigged.

But Moldova was in May still invited to join the EU’s “Eastern Partnership” – a Polish-Swedish origin project to improve EU relations with six former Soviet states.

Mr Bildt sent Polish foreign minister Radek Sikorski as his envoy to Cisinau on Friday with a call for the country to adhere to “European values and principles.”

Mr Sikorski in Brussels on Monday made an explicit link between election behaviour and potential EU aid.

“The Moldovan authorities face a choice: either there are free elections and then we [the EU] say we are ready to intensify our relationship with Moldova on the Eastern Partnership, visa facilitation, economic assistance and a free trade zone, or Moldova will isolate itself,” he said during a press briefing.

The Pole mentioned freedom of the press, well-prepared voter registers and a “climate of liberty” as pre-conditions for a positive EU opinion.

It also calls on Cisinau to set up a promised commission of enquiry into the April events.

In return, Poland pledged to be Moldova’s “advocate” in future Eastern Partnership projects and in the country’s potential talks with international lenders such as the International Monetary Fund (IMF), the European Bank for Reconstruction and Development and the European Investment Bank.

The IMF predicts that Moldova’s GDP will tumble by 9 percent this year. The country is already the poorest in Europe, with average monthly wages of less than €200.

It relies economically and politically on Russia, with Moscow still keeping some 500 troops in the separatist region of Transnistria.

The latest opinion polls showed the Communists winning between 31 and 38 percent of the vote, much lower than the majority they claimed in the April elections.

Three opposition parties have a combined score of around 30 percent, but one of them could forge an alliance with the Communists under a deal to oust Mr Voronin.

“In Europe, Communism as a political regime …still exists only in Moldova,” the liberal opposition parties said in a statement on the last day of the campaign. “We have a chance in this election to turn this gruesome page once and for all.”

Mr Voronin, 68, has been in office since 2001 and cannot stand for a third presidential term but is hoping to take the powerful post of parliament speaker instead. He has been campaigning on fears the opposition might seek to reunite Moldova with Romania, of which it was part until 1940.

“On July 29 …you will answer this question: should Moldova exist as a country, as a society – this wonderful and unique fatherland of ours?” he said last week.