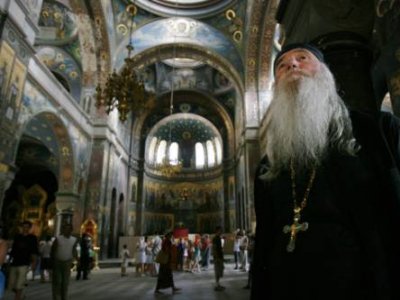 The four-wheel drive sweeps past the group of Russian tourists climbing to the ruins of the Anakopia fortress overlooking what Abkhazia says was once the capital of its ancient kingdom.

Alkhas Argun steps out to inspect his work, restoring the pale stone walls of the fortress, a symbol of the statehood Abkhazia wants to forge 16 years after throwing-off rule by Georgia at the end of the Soviet Union.

“On paper, a state can be created de jure (by law), but de facto it does not exist,” said Argun.

“Then there are states that exist de facto for centuries, but the world wants nothing to do with them. What is important is that the state is formed from within, that it is self-sufficient, to some degree.”

But both economic and military self-sufficiency remain a long way off for Abkhazia, whose dependence on Russia is huge and growing, causing some of its 200,000 people to glance uneasily north to their giant former Soviet master.

Through the cypress trees and beyond the silver domes of the Novy Afon Orthodox monastery, a Russian warship sits motionless off the Black Sea coast, part of a military force that swept into the region last August as war raged between Russia and Georgia in Georgia’s other breakaway region, South Ossetia.

Pro-Western Georgia’s assault on South Ossetia and Russia’s crushing counter-strike gave Abkhazia the chance to seize the last corner of its territory, pushing Georgian security forces out from the upper gorge of the Kodori river.

But Abkhazia has been shunned by the rest of the world. A year later, only Nicaragua has followed Russia in recognising both South Ossetia and Abkhazia as independent states.

“They (Russians) are of course our protectors,” said Abkhaz Deputy Defence Minister Garry Kupalba, as the next generation of officers practiced drills among palm trees at a training centre in the capital, Sukhumi.

“Our citizens know foremost that no one else but the Russians stand with us. A year ago we didn’t have such confidence.”

Russia plans to build naval and army bases, and has taken control of Abkhazia’s de facto borders, a move it says is essential to defend against Georgian military ambitions.

With few sources of income, besides a trickle of Russian tourists to its Black Sea coast, Abkhazia imports 97 percent of its food products and relies on Russia for 90 percent of its foreign investment.

Its pensions are paid by Russia, and it uses the rouble as its currency.

“For every rouble brought in by tourists, we give 90 kopecks back to our neighbour,” said Economy Minister Kristina Ozgan.

She says Russian aid accounts for less than 50 percent of Abkhazia’s tiny budget, but Beslan Boutba, leader of the opposition Party of Economic Development, calculates it is closer to 65 percent.

“To live forever on charity is impossible. That means we are dependent,” said Boutba. “We need a concept of development, of how we can get out of that situation.”

Unlike smaller, landlocked South Ossetia, Abkhazia rules out joining Russia in the future and is considered by Western analysts as a more viable state than its fellow rebel region.

Its sub-tropical Black Sea coastline gives it the opportunity to re-establish itself as a hotspot for Russian tourists, a potentially valuable source of income.

Russian-backed shiny hotels and restaurants have sprung up along Sukhumi’s winding promenade. Gagra, 60 km (37 miles) north of the capital, is banking on its close proximity to Sochi, where Russia will hold the 2014 Winter Olympics, for prosperity.

That Abkhazia must turn today to its northern neighbour is inevitable, said Foreign Minister Sergei Shamba. And the West, in backing Georgian claims and shunning the Abkhaz authorities as illegitimate, shares responsibility, he said.

“The Western community is doing everything to leave us with only one route — to Russia,” he said.

Few scoff at the military backing provided by Russia.

Around 8,000 people died and some 200,000 Georgians fled in the 1992-93 war, when newly-independent Georgia sent soldiers and paramilitaries to stamp out Abkhaz calls for secession, only to be pushed back to today’s de facto border by Abkhaz militias, backed by Russian forces.

Across Abkhazia, the scars of conflict are clearly visible.

Sixty thousand have since returned to the eastern Gali region on the Georgian border, where torched homes still bear witness to a wave of violence.

In Sukhumi, ruined homes are fenced off within site of the promenade, where Russian girls in short skirts wait until the muggy afternoon heat cools to walk along the pebble beach.

And the bumpy road to the boundary with Georgia proper — a road to nowhere for most Abkhaz — is now disintegrating under encroaching foliage, as if returning to nature.

The controlling hand of greater powers, Russia among them, has long been a dominant theme in Abkhaz history. But opponents of President Sergei Bagapsh are increasingly wary of the control Russia is garnering.

They point with concern to the handover of the railway to Russian administration, which the government says is essential for international recognition of its transport links.

“Among the political hierarchy, although said in couched terms, there’s no question there’s a great deal of concern about Abkhazia becoming not just a protectorate of Russia … but basically ceding control of its day-to-day affairs,” he said.