NATO Could Withdraw from Kosovo in Four Years 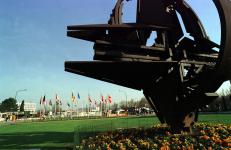 The new head of NATO has said that its Kosovo force could be completely withdrawn within four years. Anders Rasmussen, NATO’s new secretary general, said he wanted to see Kosovo Force, KFOR, “reduced to just a small reaction force, or out altogether” within his four-year term.

In his first remarks in the new position, he told a press conference the withdrawal process “should not be rushed – we should not stumble so close to the finish line.”

“But I believe that the conditions will, in the foreseeable future, be right to retire KFOR with success.”

Earlier this year, NATO confirmed it would reduce its troop numbers in Kosovo from 14,000 to 10,000 by January 2010. It was also suggested that the deployment could be cut to 2,500 in the future.

Rasmussen’s predecessor, Jaap de Hoop Scheffer, had repeatedly refused to give a deadline for a complete withdrawal.

KFOR entered Kosovo on June 12, 1999, under a UN mandate to end the conflict between Serbia and Kosovo.