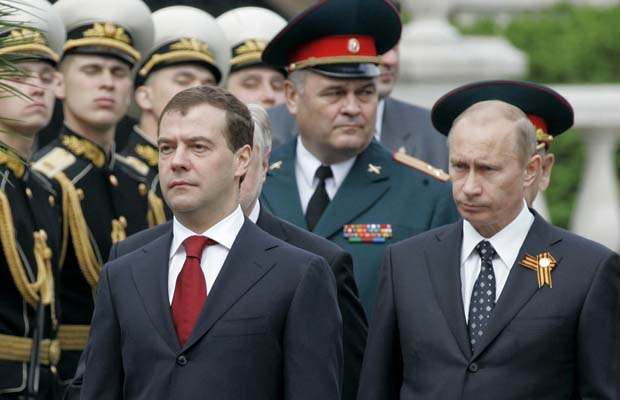 MOSCOW – A year after fighting a war with Georgia, Russia strengthened the combat readiness of its troops in the rebel region of South Ossetia on Tuesday and warned the United States against rearming Georgia.

“Provocations from the Georgian side … are not stopping,” Andrei Nesterenko, a Russian Foreign Ministry spokesman, said in a statement. “In connection with this, we have stepped up the combat readiness of Russian troops and border guards.”

Tension has been rising in South Ossetia ahead of the Aug. 7 anniversary of the war, which began when Georgian forces launched an assault on the Moscow-backed rebel enclave.

Kremlin chief Dmitry Medvedev discussed the situation in Georgia with U.S. President Barack Obama on Tuesday. The Kremlin said they discussed the lessons of last year’s war by telephone but gave no details on what was said about Georgia.

The European Union has called on all sides to show restraint but in recent days the rebels and Georgia have accused each other of firing across the de facto border.

“The Russian occupiers and proxy regimes still continue to pursue their efforts aimed at further raising tension,” the Georgian Foreign Ministry said in a statement.

Tbilisi said late on Monday that three rocket-propelled grenades were fired from the rebel region at a Georgian village near the boundary. No one was hurt. South Ossetia has accused Georgian forces of firing mortars, a charge Tbilisi denied.

The rebel region’s leader ordered the closure of the last segment of the border through which ethnic Georgians living in the Georgian-populated Akhalgori region had previously been given permission to cross.

“To avoid any kind of provocation from the Georgian side, from 12 o’clock tonight the state border with the republic of South Ossetia will be closed,” the enclave’s leader, Eduard Kokoity, a 44-year-old ex-wrestler, said on the rebel website www.cominf.org.

The only official way into the pine-covered region is through the Rocky Tunnel from Russia’s North Ossetia region.

“Washington is playing the key role in rearming the Georgian war machine.”

He said Moscow “would not stand aloof, watching an unpredictable regime being again openly armed right at our borders in the Caucasus.”

But officials in Washington said that after last year’s conflict, the United States had focused on helping to improve the education and professional standards of Georgia’s military, not on resupplying it with equipment lost in the 2008 war.

“Our priority in the short term … is on these professionalization and training programs,” Alexander Vershbow, assistant secretary of defense for international security affairs, told a Senate hearing.

“As their (Georgia’s) capacity to absorb equipment improves, based on this preparation, other forms of assistance can take place. Nothing is off the table, but we believe a phased approach is the way to go.”

Assistant Secretary of State Philip Gordon told the hearing that while Washington was concerned by events of the last few days in the Caucasus, “I don’t think conflict is likely.”

Gordon, who is in charge of European and Eurasian affairs, said Washington had been “closely engaged with the Georgian side, making sure that they don’t respond to any provocations, if that was indeed the intent.”

After an EU-brokered ceasefire ended the five-day war, Russia recognized South Ossetia and another rebel region, Abkhazia, as independent states, though the rest of the world still considers them part of Georgia.