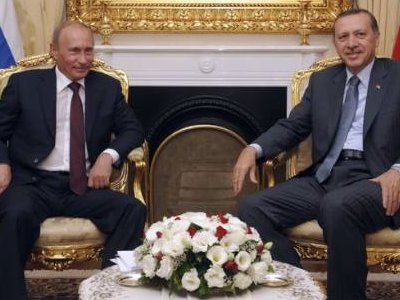 The talks are expected to focus on Turkish support for a major Russian natural gas pipeline project that Moscow wants to build ahead of a rival European Union-backed pipeline.

Turkish support for the Kremlin-backed project, which aims at protecting Russia’s 25 percent share in the European gas market, would ensure both delivery and supplies of Russian gas. That is a promise the rival EU-backed Nabucco project, which is still searching for gas supplies, has yet to deliver.

Analysts say the agreements expected to be signed on Thursday also point to EU-member candidate Turkey’s greater regional political ambitions in the region, expanding beyond its traditional Western allies.

Putin flew into the Turkish capital on Thursday morning. Italian Prime Minister Silvio Berlusconi was to join the talks later in the day to emphasise Italy’s support for the South Stream project, conceived by Russia and Italian ENI.

In exchange for Ankara’s participation in the project, Moscow is expected to give its support for several Turkish energy projects including an oil pipeline planned to run from the Black Sea town of Samsun to the Mediterranean oil hub of Ceyhan.

Turkey’s energy minister said on Wednesday he expected the Russian firms to lower the price they wish to charge for electricity from the power station.

Turkey has delayed final approval of the Inter RAO-Atomstroiexport bid, pending revision of the price the consortium would charge for electricity from the plant, which is expected to go into operation in July 2016.