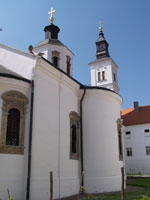 The Serbian Orthodox Krušedol monastery on Mt. Fruška Gora is marking five centuries since its foundation. The anniversary will be celebrated with holy liturgies and a church and folk assembly.

Metropolitan of Montenegro and Littoral Amfilohije and 14 bishops of the Serbian Orthodox Church (SPC) served a liturgy at the monastery with several thousands worshippers present, and with visitors from all parts of Serbia and the Republic of Srpska (RS).

Vojvodina Executive Council President Bojan Pajtić, members of the council, Russian Ambassador to Serbia Aleksandr Konuzin and other members of the diplomatic corps, as well as representatives of the Serbian Army and police (MUP), are attending the central ceremony of the Quincentenary Jubilee.