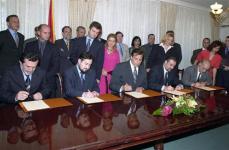 Macedonia is marking eight years since the signing of the 2001 Ohrid Peace Accord, which put an end to a six month ethnic Albanian insurgency.

The central ceremony marking the anniversary will be held in the winter resort of Mavrovo, situated near the north-western town of Tetovo, a focal point of the 2001 conflict.

The deal was signed by Macedonia’s then-president, the late Boris Trajkovski, and the four main political parties in the country at that time: the Social Democrats, VMRO-DPMNE, the Democratic Party of Albanians, DPA, and the Party for Democratic Prosperity.

The deal enjoyed the active support of the EU and US and envisaged the disbandment of the Albanian insurgent’s paramilitary wing, the National Liberation Army, NLA. The NLA was later transformed into a political party, the Democratic Union for Integration, DUI, which is now a member of the ruling coalition.

Under the accord, Macedonia’s constitution was changed and positive discrimination towards the ethnic Albanian population was introduced in public service, military and police employment practices. The wider use of the Albanian flag and language were also allowed, alongside a series of other supporting measures.

Eight years on, the deal’s provisions have yet to be fully implemented and are still subject to different readings by Macedonia’s key political players. However, the majority of signatories, including the DUI party and supporting international states, still endorse the accord and urge the full realisation of its provisions.

However, the opposition DPA recently asked for a new pact that would supplement the accord, with leader Mneduh Thaci arguing that the current agreement is dysfunctional and “obsolete”. He accused the ruling VMRO-DPMNE of totally ignoring the accord’s provisions, and claimed that the DUI is an accomplice in this effort as it focuses on staying in power.

“The EU keeps advocating the implementation of the Ohrid Peace Accord as the best instrument for supporting the country’s stability and multi-ethnic character”, the EU ambassador to the Macedonia, Erwan Fouere, recently told local media, adding that there is no need for a supplemental deal.

The EU has set the implementation of the accord as a benchmark for the country’s progress towards full membership of the bloc.

Deputy Premier Abdilakim Ademi, who is responsible for the accord’s implementation, agrees that there is no need for a further agreement.

“On the contrary, everybody should support the implementation of this internationally guaranteed document, that put an end to an internal conflict and opened Macedonia’s road to the European Union and to NATO membership,” Ademi told state-owned news agency MIA.

Most of the laws deriving from the accord have been adopted, but more should be done to ensure the agreement’s practical application, Ademi says, mentioning the Law on Languages and power decentralisation process as the agreement’s key pillars.

The executive director of the Association for Democratic Initiatives, Albert Musliu, says that, while the framework agreement (accord) is supposed to serve as a foundation for multi-ethnic coexistence, the document has often triggered tensions between parties, which clash over how to expedite associated laws.

Commenting on appeals for the agreement’s revision, Musliu said that political parties should reach a joint position on the Ohrid Accord’s significance to the country: “The document cannot be productive if both sides [ethnic Macedonian and Albanian parties] view it differently,” he said.

According to the latest opinion poll, conducted by the US-based International Republican Institute, more than half of Macedonian citizens endorse the Ohrid deal and believe that honouring its provisions would strengthen their country.