Speaker Guilty of Conflict of Interest 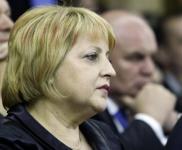 The Committee for Preventing Conflicts of Interest says that she broke the law by simultaneously acting as speaker and as a paid adviser to the Galenika pharmaceutical company.

The committee, which began reviewing Djukic-Dejanovic’s case on July 8, issuing a “non-public measure of warning” on Wednesday which gives her two weeks to resolve the issue.

“I am surprised at yesterday’s decision by the security board that I am in a conflict of interest, but I shall take it as binding for me. As of today, somebody else shall have to do the job for the Galenika company,” daily Blic quoted Djukic-Dejanovic as saying.

The speaker, who is a member of the ruling Socialist Party of Serbia, started working for Galenika two months ago for a monthly fee of €700, Blic reports.

As she explained in an interview with the daily, she was still working as a professor and doctor when appointed to her parliamentary position, and chose to receive a doctor’s salary rather than that of the speaker.