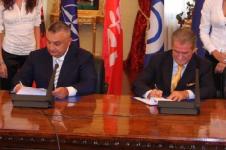 Albania’s conservative Prime Minister Sali Berisha and former Socialist premier Ilir Meta signed a coalition agreement on Wednesday, shaping the core of the cabinet that will govern the country for the next four years.

The deal has been two months in the making and was announced after Berisha’s right-wing Democratic Party and its smaller allies on the right failed to secure the necessary votes to form an absolute majority in the legislature.

Meta, now the head of the Socialist Movement for Integration, LSI, will take the post of deputy prime minister and will hold the foreign affairs portfolio. The LSI is a splinter group of the larger Socialist Party, which will lead the parliamentary opposition.

In coming days, Berisha is expected to hold talks with his party’s smaller allies on the right, including the Republican Party and the Party for Democracy and Integration, which are expected to be offered two ministries. All other cabinet positions will be fillled by the Democratic Party.

“Our common interest is to create a cabinet that will bring Albania into the European Union,” Berisha said during a joint press conference with Meta.

The LSI also promised to push forward with reforms mandated by the EU, which reflect key party policy positions, but also promised some more left wing initiatives to combat poverty and create 120,000 new jobs over the next four years.

Meta’s power grab seemed impressive to many, considering his party only returned four deputies to the 140-seat unicameral assembly.

“Although the LSI is the kingmaker of this government, it has only four deputies in parliament and the [governmental] posts that it has received are considerable,” says Dardan Malaj, political editor for daily Shqip.

Malaj notes that Berisha seems to be in a weaker position, because his party lacks the majority it enjoyed during the term of the outgoing government. The premier, therefore, seems more prone to giving away government posts, he argues.

“The main coalition partner in the previous government, the Republican Party which had 11 deputies, was only represented by one minister in the cabinet,” Malaj points out, adding that Meta is known as a tough negotiator, even within the left.

The parties’ agreement will span the next four years, which means that the Democratic Party and the LSI will cooperate in the 2011 local elections. They have dubbed the new cabinet the “government of European integration”.

Former arch-rivals, Berisha and Meta have accused each other of almost everything over the last two decades, including corruption, money laundering, and even of holding ties to organised crime.

In 2000, when Berisha was in opposition and Meta was premier, the later even ordered the detention of the current prime minister for a few hours, accusing him of orchestrating a violent protest in his hometown of Bajram Curri, in order to overthrow the government.

Prifti, the new economy and energy minister, who held a similar position in 2000, was accused of corruption by Berisha when the current premier was in the opposition. Berisha claimed Prifti had received kickbacks from Serbian energy traders in handling the award of lucrative electricity import tenders.

Similar accusations have commonly been made by the LSI, and Prifti himself, against Berisha over the last four years in relation to business dealings with the same companies.

Transparency International ranks Albania as the most corrupt state in the region, and no one expects the new government to take the struggle against high-level graft seriously.

However, many analysts believe that Berisha will be weaker and more moderate than in his previous term in power, when he lashed out continuously at General Prosecutor Ina Rama and the judiciary for investigating government ministers.

The prime minister’s attacks on the justice system provoked harsh criticism from both the EU, which Albania aspires to join, and the US, which was instrumental in smoothing Albania’s accession to NATO last April.

“A weaker government could dampen the arrogance of ministers and of the government, because every major reform will now also need the backing of the opposition,” says Eltion Hoxha, a senior editor for daily Shekulli.

Meta’s move from the left to a government led by the right, which the Socialists have compared to treason, could also force the LSI head to moderate Berisha’s often arrogant governnance style in order not to lose his party’s electorate.

“At some points Meta will be forced to moderate the way Berisha governs,” notes Malaj, adding that the country is under Brussels’ watchful gaze, following its application for EU candidate status and bid for European visa liberalisation.

“Berisha has to be very careful considering that both of these bids are pending,” Malaj added.