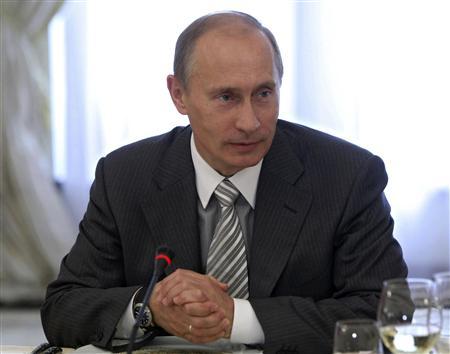 Russia’s Vladimir Putin on Friday gave his strongest indication yet that he may run again for the presidency at the next election in 2012.

Ever since Putin’s presidential term expired last year and he made way for his chosen successor Dmitry Medvedev, there has been speculation the move was only temporary.

Putin, now serving as prime minister, remains extremely popular among Russian voters despite the economic downturn and he continues to dominate the political scene.

Speaking to the Valdai discussion group of Russia experts, Putin said the transition at the top in 2007/8 had been a smooth one and there would not be any competition between himself and Medvedev in 2012. “We share political views.”

“In 2012 we shall think together and take into account the realities of the time, our personal plans, the political landscape…and we will take a decision,” he said.

Academics attending the three-hour lunch at Putin’s summer house outside Moscow said Putin was preparing the ground for a possible return and it was clear he was calling the shots.

The next president will serve a six-year term following a change to the constitution rushed through shortly after Medvedev took office. Putin could serve two consecutive terms, meaning he might not step down until 2024.

“My impression is that by saying there cannot be any competition and they are of one mind, he is making clear that whatever the decision is, it is Putin’s to make,” said James Sherr, head of the Russia and Eurasia program at British think-tank Chatham House.

Putin left the Kremlin in May 2008 after eight years as president but he remains a towering figure in the capacity of prime minister, a role that is traditionally secondary here. He also leads the dominant political party, United Russia.

Analysts point out that if Putin does not run in 2012, by which time he will be 59, he is arguably out of politics for good. For Russia’s international partners, Putin is a straight talker and hard bargaining counterpart. Investors like his predictability.

In typically direct terms Putin addressed the notion of ‘resetting’ relations with the United States by making clear in his view most of the work to be done was on the U.S. side.

He accused the United States of blocking Russia’s accession to the World Trade Organization despite repeated promises that membership was in sight.

He said Russia had made strides in dismantling and destroying warheads, while the United States had dismantled and stored its arms.

And Russia had ratified and fulfilled the provisions of the treaty governing conventional forces in Europe while the United States expanded its interests toward Russia’s borders.

“Can you imagine such an agreement? Only fools would sign it but we did. Finally we said we were halting our participation and people cried like frogs in a swamp.”

“Resetting – we would welcome it if something were done.”

Putin said meetings with U.S. President Obama gave grounds for some optimism, but he was looking for actions to back up the words. “There are positive signals but we would like practical steps,” he added.