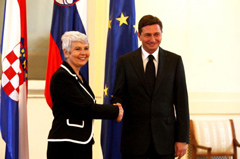 Slovenia is set to unblock Croatia’s EU accession talks, while Zagreb is set to withdraw the disputed documents that prejudice the border between the two states.

“The two countries are winners following the .. and successful dialogue,” Pohor said after the meeting.

Slovenian media said Kosor has already written a letter to the Swedish EU presidency, noting that no document issued after 25 June 1991 has legal grounds.