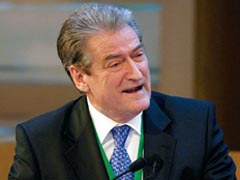 Berisha’s chosen ministers were confirmed by parliament late Wednesday in a 74-1 vote. The deputies of the opposition Socialist Party boycotted the session, demanding a probe into the results of parliamentary elections, which they say were manipulated.

Berisha, introducing his government to the parliament Wednesday, said the new government’s top priority is to press ahead with Albania’s integration into the European Union, step up the fight against corruption and foster the country’s economic development.

Vangel Dule, the deputy of Human Rights Party – an ally of Socialist Party – criticized the government’s programme, saying it lacks a strategy to address the rights of ethnic minorities in Albania, a country aspiring for EU membership.

Post Views: 87
Previous Azerbaijanis in Georgia worry about closure of Russia-Azerbaijan land border for them
Next MPs pass decision on resignation of Greceanyi Government II