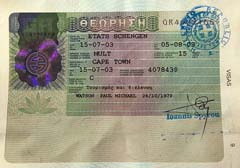 The Committee on Civil Liberties, Justice and Home Affairs, a standing committee of the European Parliament, will review the report on visa liberalization for the Western Balkans.

The Committee is expected to vote on the report, drafted by Slovenian MEP Tanja Fajon on September 15. The report will be put on the agenda of a plenary session of the European Parliament in November.

The key message in Fajon’s draft-report is that political decision on lifting the visa requirements for citizens of Macedonia, Serbia and Montenegro be supplemented with a statement saying that Bosnia-Herzegovina (BiH) and Albania should catch up with their neighbors. The draft-report also calls for inclusion of Kosovo in the visa liberalization process.

Macedonia is the only country that fully met the conditions for visa-free travel to EU countries. Serbia and Montenegro are expected to present a new report on the advance towards visa liberalization by the end of the week. New reports are expected from BiH and Albania in October.

In July, the European Commission submitted a proposal to the European Union to lift the visa requirements for citizens of Macedonia, Serbia and Montenegro as of January 2010.