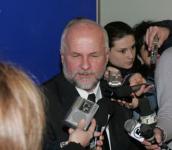 The ethnic Albanian Democratic Union for Integration, DUI, might leave the government if the prime minister fails to clearly condemn a controversial Macedonian encyclopaedia.

Referring to his party’s leader, DUI Vice President Rafiz Aliti told reporters Monday: “If [Ali] Ahmeti decides, we are ready to leave our posts at once.”

Aliti said that “coalition relations have worsened” and that the DUI is waiting on Ahmeti to signal the party’s next step. Ahmeti has called on Prime Minister Nikola Gruevski to condemn the encyclopaedia, which calls local ethnic Albanians “settlers” in Macedonia and “Shiptari” – both terms seen as offensive by this community.

The premier told reporters on Monday that he had nothing to add to his sole previous public statement on this burning issue.

On Sunday, he did not directly condemn the disputed edition, published by the Macedonian Academy of Sciences and Arts, MASA, and funded by the government. Gruevski directed Ahmeti to talk to MASA academics regarding the controversial sections of the volume and blamed retrograde forces in the country for stoking the controversy thereon.

Local media speculate that Ahmeti was not satisfied with this statement. Ahmeti has said that the publication of the book was seriously hampering the implementation of the 2001 peace agreement, which brought an end to the insurgency.

The MASA has pledged to rewrite the disputed sections of the book.

All ethnic Albanian political parties in the country have asked for the publication’s complete withdrawal and for a public condemnation and apology from the premier and president.

If the DUI, which holds 18 of the parliament’s 120 seats, leaves the government it will make it harder for the 53 deputies of Gruevski’s VMRO-DPMNE to form a new majority. Although some minor parties might tip the balance in favour of Gruevski’s party, other major ethnic Albanian parties are hardly likely to join a reworked coalition under the current circumstances.

The situation became even more incendiary after former Albanian prime minister Pandeli Majko said that Albanians are within their rights to burn the Macedonian flag.

Non-parliamantary ethnic Albanian movements are preparing a protest in front of the government building onThursday. They say they cannot guarantee that all participants will follow their advice not to burn the flag as an act of “emotional revolt”.