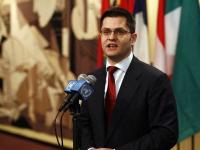 Serbian Foreign Minister Vuk Jeremic says that Serbia will see in the next couple of weeks how successful it was in preventing further states from recognising Kosovo.

In an interview with daily Danas, Jeremic said that the Serbian delegation to the UN General Assembly in New York had held meetings with around 30 countries that are coming under pressure to recognise Kosovo’s unilaterally declared independence.

“Lobbying for new recognitions of the unilateral independence declaration continues by those who have done so in the past. Unfortunately, some of the most powerful countries are among them,” the minister was quoted as saying.

Earlier this week, Serbia sent a protest note to the UN regarding a Kosovo delegation’s presence at the UN gathering.

In an interview with broadcaster B92 on Monday, Jeremic said that the Kosovo delegation’s attendance violated the UN code of ethics. He, thus, called for an immediate investigation into how this occurred.

“The United Nations did not issue passes to the Kosovo representatives to enter the General Assembly hall,” B92 quoted Secretary-General Ban Ki-moon’s spokesperson, Brenden Varma, as saying

Jeremic explained that all Assembly participants had a number of passes that they could give to whomever they chose. He suspects that the Albanian delegation gave passes to Kosovo representatives, who then entered the building.

The minister says that the Serbian delegation met over 70 foreign officials in New York, as it lobbied to prevent further countries from recognising Kosovo.