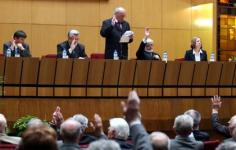 The presidency of the Macedonian Academy of Science and Arts, MASA, decided on Wednesday to withdraw its controversial Macedonian encyclopaedia.

The editors of the encyclopaedia were ordered to revise and correct the passages in the book that refer to Macedonian-Albanian relations, Albanians in Macedonia, the former head of the 2001 ethnic Albanian insurgency, Ali Ahmeti, and the insurgent forces.

They are to revise the book as soon as possible with the assistance of ethnic Albanian members of the MASA, who had previously distanced themselves from the publication.

The MASA presidency says that it will stage an extraordinary session with the editors, who are led by academic Blaze Ristovski, to determine responsibility for the contentious sections of the tome.

The decision came as ethnic Albanian students from South Eastern European University gathered in the Macedonian town of Tetovo to express their disgust with the encyclopaedia.

Parading in central Tetovo, the protestors carried slogans saying: “Stop the Encyclopaedia” and “Alexander [the Great] is Albanian”.

References in the encyclopaedia to to ethnic Albanians as “settlers” who came to the country in the 16th century and to Albanians as “Shiptari” – a term with derogatory connotations – have caused significant offense.

“The Macedonian encyclopaedia released by the academy contains many pseudo-scientific facts and other forgeries and insults against […] Albanians” Valon Kurtishi from an NGO that helped organise today’s protest, Ilirikum Libertas, told the A1 TV station.

The row has soured relations in the government with the ethnic Albanian Democratic Union for Integration demanding that Prime Minister Nikola Gruevski condemn the book, which he promoted only two weeks ago.