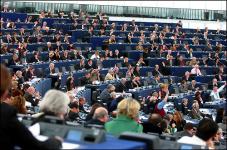 The European Parliament’s rapporteur on visa issues, has proposed that the European Commission, EC, include all five western Balkan states in the EU visa liberalisation programme.

Slovenian MEP Tanja Fajon made this recommendation, while arguing that the two states that have yet to meet all necessary benchmarks be included on the White Schengen list in lieu of criteria being met.

“As regards Albania and Bosnia and Herzegovina, the exemption from the visa requirement should apply without delay, immediately after the assessment by the Commission that each of those countries meets all the benchmarks set in the roadmap for visa liberalisation, and a notice about the assessment is published in the Official Journal,” Fajon’s draft report reads.

“I am proposing amendments which, without lowering the benchmarks set in the roadmaps for visa liberalisation, leave a path for Albania and Bosnia to catch up with Macedonia, Montenegro and Serbia,” Fajon said Wednesday in an address to the European Parliament, where her report was being discussed.

“The deal is very simple: visa requirements for each of the two countries are lifted immediately after one or the other one fulfils all the benchmarks set by the Commission, but without again needing to amend the regulation,” she added.

On July 15, the EC proposed that three western Balkan states: Macedonia, Montenegro and Serbia, be included in the EU visa-free scheme.

While only Macedonia had met all established benchmarks, Serbia and Montenegro were also granted entry into the visa liberalisation regime.

Albania and Bosnia and Herzegovina were excluded from the first wave due to their lack of progress on technical requirements. Citizens of Kosovo who have Serbian passports also cannot enjoy visa-free travel to bloc states, but the same is not true for citizens of Bosnia and Herzegovina who also have Serbian citizenship and Serbian biometric passports.

The European Parliament has criticised the EC recommendation to exclude Bosnia from the first wave of invitations.

The final parliamentary report will call for changes in the entry regulation. However, given the current mood, the EC looks unlikely to comply.

Daphne Gogou from the cabinet of the commissioner in charge of internal and justice affairs, Jacques Barrot, told MEPs that the European Parliament’s request, to change the current regulation, will cause further delays in implementing the visa liberalisation regime for Macedonia, Montenegro and Serbia.

“All conclusions will have to be supported by EU member states, and this takes time,” Gougou told the European Parliament.

However, Fajon, who is reportedly supported by a majority of MEPs, insists that her proposal will save the time and energy of European institutions, while sending positive signals to the countries concerned.

“With this proposal, we will not leave any state behind and will not lose additional time,” Fajon said. “As this extra time would weigh heavily politically in the two states [Bosnia and Albania], it is worth finding a flexible legislative solution,” she added.

In addition, her report calls on the EC to also start the visa liberalisation process with Kosovo. Kosovo has been excluded from the visa talks because five member states have yet to recognise its independence and passports.

“The Commission – within the limits of its competence – should start a visa liberalisation dialogue with Kosovo and establish a roadmap for visa liberalisation similar to the roadmaps established with other western Balkan countries. This is without prejudice to the status of Kosovo,” the report says.

MEPs will vote on the report in mid-October and are certain that the majority of deputies will vote in favour. However, in the present legal framework, the EC is not required to acquiesce.