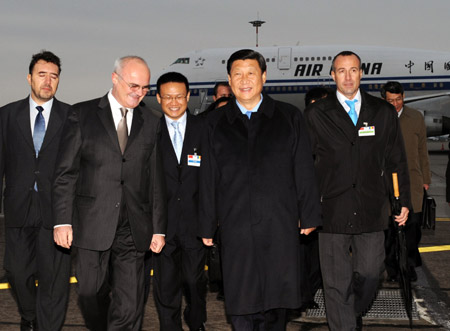 Chinese Vice President Xi Jinping arrived in Bucharest on Sunday to start his official visit to Romania after he concluded a visit to Hungary.

In a written statement upon his arrival at the airport, Xi said China and Romania have enjoyed long-term friendship, and they have enhanced political trust, cooperation in various areas, and coordination in dealing with international affairs since they forged diplomatic ties six decades ago.

Noting that the Chinese government values relations with Romania, Xi said his visit was to cement traditional friendship and reciprocal cooperation by taking the chance of 60th anniversary of bilateral ties.

“I expect to exchange views with the Hungarian leaders on bilateral relations and international and regional issues of common concern,” he said.

He also voiced his belief that the visit would promote traditional friendship and push forward the comprehensive, friendly and cooperative partnership with Romania.