Medvedev and Tadic in Talks 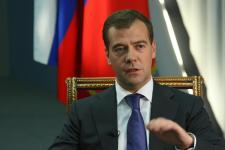 The Russian leader landed at Belgrade’s Nikola Tesla Airport at around 11am and was transported directly to Serbia Palace where he was welcomed with full state and military honours.

The Serbian and Russian delegations will later attend a ceremony in which a number of bilateral agreements will be signed. The deals cover the areas of culture, science and technology, security, education, air travel and parliamentary cooperation.

During the visit, the two parties will also discuss the Russian provision of a 1 billion euros loan to Serbia. Belgrade plans to spend a third of the sum on covering the state budget deficit.