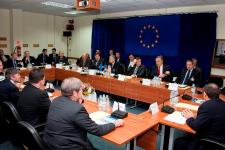 Representatives of all three of Bosnia’s main ethnic groups have essentially rejected the package of demands and incentives proposed by senior EU and US officials ahead of Tuesday’s resumption of negotiations.

Local, EU and US officials have reconvened today at the Butmir military base near Sarajevo to discuss the package, but the chances for agreement now appear to be slim.

“This proposal cannot be even a basis for discussions,” the premier of the Serb-dominated Bosnian entity of Republika Srpska, Milorad Dodik, told reporters on Monday evening. He said that the proposal contains “almost dramatic changes” to the Dayton peace accord and is unacceptable to Bosnian Serbs.

Dodik went as far as to send a letter to the US ambassador in Bosnia, Charles English, and Swedish EU Presidency, in which he said that the proposed changes were “anti-Dayton, politically incorrect and unacceptable as a basis for talks”, media reported on Tuesday.

Earlier, Dodik warned that the Republika Srpska leadership may call for a referendum for independence should the international community try to pressure local leaders into accepting the proposal.

The two main Bosniak (Bosnian Muslim) leaders also indicated that the international proposal was too weak and shallow and, as such, unacceptable.

“There is a line beneath which we will not go. We will not accept cosmetic changes,” Sulejman Tihic, the leader of the strongest Bosniak political movement, the Party of Democratic Action, SDA, said on Monday.

A press statement from the Bosniak member of the country’s tripartite Presidency, Haris Silajdzic, was critical of senior EU and US officials for excluding entity voting from their proposal – currently the most important and disputed element of putative constitutional reforms.

Bosnian Croat leaders Dragan Covic and Bozo Ljubic have said that the package will act to further weaken the Bosnian Croat negotiating positions within joint institutions.

“At least there is one thing all local leaders agree upon; they all agree to disagree with the package proposed by the EU and US,” one international official said, ironically.

The likely failure of the talks comes despite strong efforts by EU and US officials to put together a proposal that would entice local leaders to abandon their maximalist, conflicting and unrealistic demands and end Bosnia’s long-standing political deadlock.

On October 9, US Deputy Secretary of State James Steinberg and Swedish Foreign Minister Carl Bildt held a meeting with representatives of most top Bosnian parties at Butmir to deliver the package of conditions and incentives, which they hoped could turn the tide in Bosnia and Herzegovina.

A team of US and EU officials remained on the ground in an effort to build support for the proposals in meetings with local leaders ahead of today’s resumption of talks.

EU enlargement commissioner Olli Rehn arrived in Bosnia on Monday and was scheduled to join Bildt and Steinberg at Butmir today. Bosnian Premier Nikola Spiric met Rehn on Monday evening and presented him with an example of Bosnia’s first biometric passport.

Rehn congratulated Spiric on the progress which Bosnia has made recently in fulfilling conditions required for inclusion in the EU visa-free regime. But he stressed that Bosnia still has much to do both in meeting the requirements for inclusion in the scheme and in reforming its constitution in a manner in keeping with European standards.

Speaking to the press, Rehn added that the new round of Butmir talks was “an opportunity that should not be missed”.

Rehn’s words were reflected by a statement from Bosnia’s High Representative Valentin Inzko: “Bosnia and Herzegovina leaders must realise the significance of this moment and do their best to succeed. They owe it to the citizens and this country,” he said.

Some local and international analysts and commentators have warned that the content of the package, and the way in which it was formed, have not only impeded its chance of success but may have further undermined western authority in Bosnia, including Inzko’s own position.

On Monday, three former high representatives to Bosnia and Herzegovina, Wolfgang Petritsch, Paddy Ashdown and Christian Schwarz-Schilling, issued a joint statement that was sharply critical of the Butmir package. They stressed that a new international approach is needed.

Should the talks fail, the international community “must maintain reserve power to internationally guarantee Bosnia and Herzegovina’s peace and stability; also after the closure of the Office of the High Representative”, the statement read.

The statement comes amid growing concerns amongst analysts, media and other informed observers concerning the potential for a rapid deterioration of the situaition in the country.

Britain’s Telegraph newspaper published an article on Monday, in which it warned that Bosnia is “on the brink of new civil war”.

“If it continues to go on like this, there is no question there will be conflict. It’s just a question of what kind of conflict there will be, and is it going to be in three months, six months or one year,” the newspaper quoted Bosniak leader Sulejman Tihic as saying.