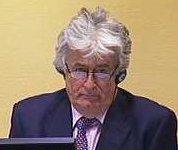 The Hague Prosecution has submitted its plan for the presentation of evidence in the trial of Radovan Karadzic, from which certain crimes have been removed.

As per an order of the Hague Tribunal Chamber, the Prosecution has filed “a revised indictment” against Radovan Karadzic, which contains the counts that will be covered during the course of the 300 working hours allocated for the presentation of evidence.

The former president of Republika Srpska is charged with genocide, crimes against humanity and the violation of the laws and customs of war; crimes allegedly committed in Bosnia and Herzegovina from 1992 to 1995.

There will be no reference in the trial to the murder of tens of civilians committed in the municipalities of Bosanski novi, Brcko, Kotor Varos, Rogatica and Ilijas, near Sarajevo, during 1992.

Among other things, the Prosecution will not present evidence pertaining to the murder of around 70 civilians, incinerated in a house in Pionirska Street in Visegrad in June 1992, or on the murder of a number of civilians at Visegrad Bridge.

The Prosecution has also reduced the number of pieces of evidence pertaining to crimes committed in various detention centres throughout Bosnia and Herzegovina. Evidence will not be presented on murders in a sports hall; the Laser Bus Company and Public Safety Station in Brcko; the murder of detainees in the hunters’ club in Cajnice; or the murder of men who were taken from the Barutni Magacin detention camp in Kalinovik and killed in a barn in the village of Ratine, in Foca municipality, in August 1992.

In addition to eliminating the evidence with regard to these murders, the Prosecution will not present evidence on numerous other crimes committed in detention centres, including the Safety Services Centre; Mali Logor and Tunjice prison in Banja Luka; the fire-brigade and police stations in Bosanski Novi; and the police station in Bosanska Kostajnica.

As far as the murders in Srebrenica and the shelling and sniping campaign in Sarajevo are concerned, the Prosecution will present most of the evidence foreseen in the indictment.

Evidence on the destruction of the National Library in Sarajevo in August 1992 will not be presented. Neither will evidence on the shelling of 50 and 70 civilians queuing for water in Dobrinja in June 1995, in which seven people were killed and 12 were wounded.