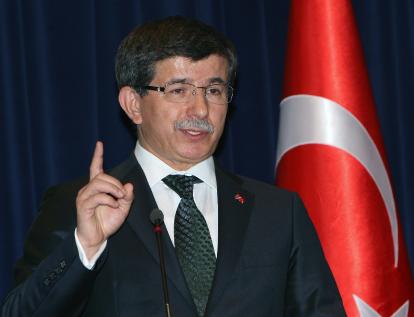 The Turkish government on Wednesday submitted the recently signed protocols on establishing diplomatic ties with Armenia to Parliament for ratification.

Turkish Foreign Minister Ahmet Davutoğlu briefed Parliament on Wednesday afternoon on the protocols signed on Oct. 10 with Armenia, which among other things foresee opening the borders between the two countries and mutually recognizing the existing borders.

In the protocols, Turkey and Armenia reconfirmed their commitment to respect and ensure respect for the principles of “equality, sovereignty, non-intervention in internal affairs of other states, territorial integrity and the inviolability of frontiers,” in their bilateral and international relations, the Anatolia news agency reported.

The protocol on developing bilateral relations aims to facilitate the development of relations between Turkey and Armenia in all fields, including opening the Turkish-Armenian border two months after the protocol goes into effect.

While the United Nations, the United States, the EU, Britain and Russia welcomed this development, the protocols sparked heated debate in Turkey and attracted criticism from the opposition.

Azerbaijan, uneasy about the recent rapprochement between Turkey and Armenia, voiced concern and sought reassurance from the government of Turkey, its old ally, that it would not reopen its border with Armenia before reaching a settlement on the Nagorno-Karabakh dispute. Davutoğlu reassured them by saying, “We share our Azerbaijani brothers’ distress and feel it like our own.”

“The southern Caucasus doesn’t have a solid ground for political dialogue,” he said. The government, however, believes normalizing relations with Armenia will bring peace and prosperity to the region.

Although Prime Minister Recep Tayyıp Erdoğan and other officials promised not to open the border before a settlement was reached, Azerbaijan announced it would raise the price of natural gas to Turkey and look for alternatives routes, bypassing Turkey, to carry gas to Europe in reprisal for the recent Turkish-Armenian rapprochement.

Republican People’s Party, or CHP, leader Deniz Baykal said during the party’s meeting Tuesday that the government was harming relations with its allies while trying to please foreign countries and that Turkey did not have the luxury of ignoring Azerbaijan.

“Our political will is to resolve our problems with Armenia through dialogue. Then, great opportunities of cooperation will emerge in all fields for Turkish and Armenian peoples. Now, we hope that Azerbaijan and Armenia will resolve the Upper-Karabakh dispute. If it happens, our people will quickly adopt the normalization of Turkey-Armenia relations,” Erdoğan said.

Turkey and Armenia have had no diplomatic ties or economic relations since Turkey closed its border with Armenia after Armenia invaded Azerbaijan’s Nagorno-Karabakh region in 1992.