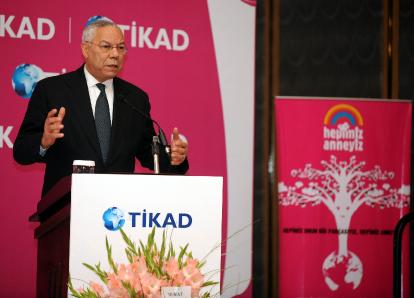 Former U.S. Secretary of State Colin Powell reiterated his support for the Turkish government’s Kurdish initiative during a speech at the “Mothers against Terrorism” conference in Istanbul on Tuesday afternoon.

While discussing the fight against terrorism he made positive remarks about the “democratic opening” in Turkey, calling it a “great step forward.” He said he also believed in the importance of Turkey as a conflict mediator in the Middle East.

“This job has a historical dimension, too,” he said. “Let’s hope that you succeed.”

“If the right tools are combined, you will be successful, I think,” he said. “If you are successful, not only this part of the world will be affected, but the world-wide economic situation will also benefit.”

He also commented on the bond between the United States and Turkey, saying that despite disagreements in the past, notably in 2003 in regard to Iraq, the connection between the two countries was strong.

The conference was organized by the Turkish Women’s Business Association.