Higher education to be more accessible for Armenians & Azerbaijanis in Georgia 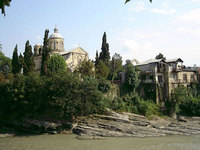 Higher education will become more accessible for Armenians and Azerbaijanis in Georgia. Relevant amendments will be made to the Law on Higher Education.

The bill, which was initiated by the government, has been already introduced to the Parliament. It aims to promote integration of Georgian citizens of Armenian and Azerbaijani nationality in the Georgian society, as they form the largest part non-Georgian language population.

Under the amendments, Azerbaijani and Armenian applicants will pass an examination only on one subject – general skills in their native language at the unified national examinations, and they will study a special program of the Georgian language in the first year. If by the end of the course, a student scores 60 credits, he/she will be able to choose a specialty and continue their studies at a university in the Georgian language.

The bill has already was endorsed by the Committee on Relations with Compatriots, although its members were in favor of making higher education more accessible for Abkhazians and Ossetians, as well.