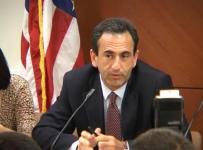 The United States Assistant Secretary of State Philip Gordon said he thinks the Athens-Skopje “name” row can be resolved soon, and in the interest of both sides.

“It is true that the agreement is possible and it is important to be resolved,” Gordon said to the Voice of America, Macedonian language, MIA reported.

He encouraged a both sides to take part in the UN-sponsored talks seeking a solution between the countries. A fresh round of talks in New York are slated for 16 November.

Gordon’s remarks echo a growing chorus of EU voices also urging both countries to hammer out a solution for their 18 years-long spat.

If there is no breakthrough by December, Athens has threatened to veto an EU Council decision to give Skopje a start date for EU accession talks.

Media speculate that some variations of the name Northern Macedonia, that would distinguish the state from the Greek province is still on the table at the UN brokered talks.