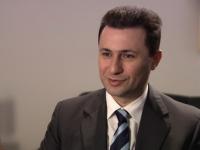 A possible Greek decision to block EU member states from setting a date for the start of Macedonia’s EU accession talks would mean Skopje’s southern neighbour does not have any interest in resolving the name row, the Macedonian Prime Minister told media.

“In December we shall see if Greece really wishes to resolve the matter, as setting another blockade will mean exactly the opposite,” Nikola Gruevski said.

He added that Greece’s decision to veto Macedonia’s entry into NATO last year and its subsequent threats are not a constructive approach for resolving the 18-year name dispute.

Athens insists that Skopje’s formal name, Republic of Macedonia, implicates territorial claims towards Greece’s own northern province that is also called Macedonia. It wants Macedonia to change its constitutional name and add a geographic qualifier in order to distinguish it from its northern province.

In October, the European Commission recommended that Macedonia starts EU accession talks, but a date for the start of these talks must be set by member states who meet at the beginning of December. Greece says it will block the setting of a start date until Macedonia changes its name.

“We have been doing our best, have completed the necessary (EU) reforms, and hence hope for a positive response (at Decembers EU Council meeting),” Gruevski said, expressing hope that European leaders will take the country’s EU reform efforts in to account and make a favorable decision.

Gruevski’s government is under increasing pressure both at home and abroad to strike a deal. Hopes for a quick resolution were raised last month after the European Commission’s positive report and the recent election in Greece of George Papandreou, who is seen as being less hawkish on the name issue than his predecessor Kostas Caramanlis.

But despite a recent courtesy meeting between the two countries prime ministers, and statements that there should be more direct contacts, Athens says there are certain “national red lines” which it cannot overcome.

Media speculate that variants of the name Northern Macedonia are at play.

The heads of Macedonia’s junior ruling Democratic Union for Integration, DUI and the largest opposition party, the Social Democrats, SDSM, Ali Ahmeti and Branko Crvenkovski say the country must mobilise all its forces before the EU council.

Post Views: 226
Previous Macedonia To Open Embassy In Kosovo
Next Russia moves to cut Ukraine out of gas supply route