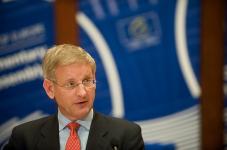 Macedonia and Greece must use the window of opportunity before the December EU council to strike a deal on their name spat that continues to block Skopje’s Euro-Atlantic integration, Swedish Foreign Minister said on Tuesday.

“This has to be dealt with bilaterally” Carl Bildt, whose country is currently running the rotating EU presidency, told media in Brussels.

He noted that Matthew Nimetz, the UN Mediator in the ongoing solution seeking talks, should be supported in encouraging both sides to reach common ground in the 18-years long dispute.

A repeat Greek blockade, this time in the EU in December can be avoided, Greece’s latest stance asserts, on the condition that Skopje accepts a name change. Skopje hopes to acquire a date for its EU accession talks, but Athens has reiterated that this will not happen if there is no breakthrough in the name talks.

Meanwhile, Macedonian leaders convened yesterday and said they will continue to take part in the UN talks in spite of, as they called them, “the extreme Greek positions” a government press release reads.

Macedonia’s negotiator in the name talks, Zoran Jolevski, and his Greek counterpart, Adamantios both met separately with Nimetz last week in New York.

Macedonian media reported, citing unnamed government sources, the negotiation process has dramatically worsened during the last round of Athens-Skopje name talks because Greece stepped up its demands while Macedonia offered no additional concessions.

Both sides neither officially confirmed nor denied these allegations.

Media speculate that some form of the name Northern Macedonia is still on the table in the New York talks.

Post Views: 230
Previous Russia to host massive military drill in 2010
Next Serbs Do Not Need Passports to Enter Kosovo