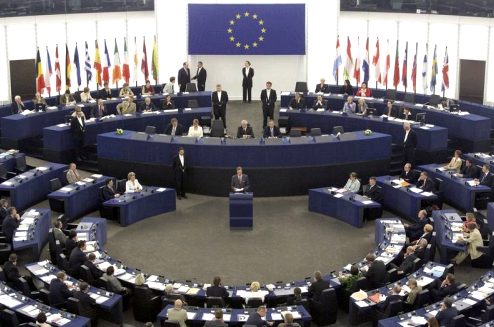 The European parliament (EP) members on Thursday in Strasbourg adopted a resolution on the EU’s enlargement strategy.

The document, drafted by the EP Foreign Affairs Committee, asks the Council of the European Union to ratify without any further delay the Interim Trade Agreement with Serbia.

The EP “notes with satisfaction the progress made by Serbia, and in particular its unilateral implementation of the Interim Agreement; is of opinion that such unilateral implementation, carried out against the background of the financial crisis, shows that country’s commitment to moving forward on the path to membership of the Union; therefore urges the Council to decide on the ratification of the Interim Agreement without delay,” the resolution reads.

The EP also urges Serbia to cooperate fully with the Hague Tribunal.

The parliamentarians also welcomed the signing of the police protocol by the Serbian authorities with EULEX and called on Serbia to further step up its cooperation with EULEX, especially as regards EULEX’s operations in northern Kosovo.

Serbia is urged to “adopt a constructive approach aimed at encouraging the active participation of the Kosovo Serb community in the Kosovo institutions.”

The resolution welcomes the intention of the Commission to strengthen relations with Kosovo.

“We expect the process of decentralization to be concluded before the end of the year in order to meet the basic requirements of the (Martti) Ahtisaari Plan, ensuring political representation for all the inhabitants of Kosovo and in particular for the Serb minority. We call on the Kosovo authorities to continue their efforts to improve and guarantee respect for the rights of minorities,” the resolution reads.

The parliamentarians also welcomed the “achievement by EULEX of a full operational capability such as will enable it to fulfill its mandate of promoting the rule of law, public order and security in transparency and accountability throughout the whole of Kosovo,” which, as specified, will “pave the way for Kosovo’s integration in the Union, if it meets the necessary conditions and requirements.”

Ahead of the voting, EU Council of Ministers presiding official Carl Bildt and EU Enlargement Commissioner Olli Rehn said that Serbia has progressed well in the implementation of the trade agreement with the EU, stressing that the EU and Belgrade should enter “a new phase of cooperation”.

Bildt said it is very important that the upcoming report by Hague tribunal Chief Prosecutor Serge Brammertz show his satisfaction with Belgrade’s efforts in cooperation with the tribunal.

Speaking about the document Rehn stressed that “there is some good news from Serbia.”

“Belgrade has proven its commitment to its integration with the EU and not only through its unilateral implementation of the interim trade deal with the EU,” Rehn said, stressing he assumes that “the Hague tribunal should be pleased with Serbia’s efforts.”

Rehn went on to say he agrees with the suggestions in the Enlargement Strategy for unblocking the interim trade deal and “moving on to the next phase on the country’s European path.”

EP rapporteur for Serbia Jelko Kacin said Belgrade must focus on urgent economic and political reforms in cooperation with its neighbors.

Rehn and Bildt also stressed that in the case of Kosovo things should move forward, towards EU accession. “Stability has been preserved in Kosovo, but it is still fragile,” Rehn noted, adding that the European Commission has composed a study on how Kosovo can make better progress in European reforms.