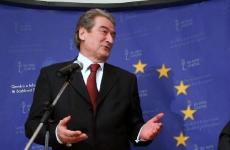 In a late evening press conference on Wednesday Prime Minister Sali Berisha presented a series of documents on what he called “the most dangerous mafia clan in the Balkans”, referring to the Albanian opposition.

In what is the latest chapter in the on-going battle between Berisha’s government and Albania’s Socialist opposition, the prime minister named a number of Socialist deputies and Tirana so-called oligarchs, which according to him, in the last few years have stolen 500,000 square meters of public space in the capital worth 780 million euro.

“I want to underline that a communist and mafia group wants to impose a legitimate government… This group of communists does not lead the Socialist party, but the most dangerous mafia clans in the Balkans, that has turned Tirana in a laundry machine of dirty money, the economic crime that is the cupola of the Albanian mafia,” said Berisha.

This was the prime minister’s response to the Socialists’ request for a partial re-count of the 28 June parliamentary elections.

The statement comes at the end of a ten day ultimatum set by the opposition Socialist leader and Tirana mayor Edi Rama, calling on Berisha to accept a partial recount or face massive protests seeking his removal from office.

The Socialist Party has waged a campaign accusing Berisha of electoral fraud and corruption in the parliamentary elections. Rama claims that his party never lost the election, which he says was stolen by the government.

His party and supporters have held a series of rallies across the country seeking a recount. Tens of thousands of Socialist Party supporters rallied in Tirana on 20 November and another major rally is planned for early December.

Calling Rama’s claims that the polls were stolen ”political revisionism”, Berisha has rejected any possibility of a recount, arguing he cannot circumvent the courts that have ruled against it.

In a statement released after Berisha’s press conference Rama accused the Albanian premier of launching a slander campaign as a way to divert attention from the political and economic crises that has engulfed the country.

“Sali Berisha is not a man that faces the truth, but a coward that tries to avoid facing the truths of this country by threats,” said Rama.

The Tirana mayor denied the corruption charges over the building permits that Berisha presented at the press conference by arguing that the Council for the Regulation of the Territory that awards them is made up of both Berisha’s Democrats and Socialists.

The two opponents have over the past week hurled increasingly harsh insults at each other, accusing the other of homosexuality, domestic violence, insanity and fascism.

Since the new parliament was reinstated in September, the Socialists’ 64 elected deputies have boycotted its sessions, halting the passage of legislation that requires more than a simple majority.

The boycott has poisoned the political climate in Albania and both European and American diplomats have called for a political solution in order not to hamper the country’s reform process, vital for its EU integration.

However, both Berisha and Rama have refused to bulge from their hunkered position, keeping parliamentary life in suspense.

The Socialist and the Democrats, the two main political powerhouses in Albania since the end of the Stalinist regime of former dictator Enver Hoxha in 1991, have a long history of political animosity, usually following disputed electoral processes.

Albania has yet to hold elections which fully respect internationally recognised standards. However the Organisation for Security and Cooperation in Europe that monitored the June polls said the process showed marked progress compared to previous polls, especially in terms of voters registration.

However, the politicization by both the parties of the ballot counting process, which was delayed for days, the use by the government of public employees and resources during the campaign and political pressure on the media by both camps, remained a serious concern to be addressed, the election monitoring body said.