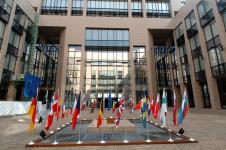 Macedonia’s name dispute with Greece has to be solved once and for all and now is a good time to do so, the chief of the European Commission, Jose Manuel Barroso told journalists in Brussels, following his meeting with Macedonia’s Prime Minister Nikola Gruevski.

He noted that the European Commission’s recommendation for the start of Macedonia’s EU accession talks, as well as member states’ announcement this week that they will lift visa requirements for Macedonian nationals later this month, should both encourage Skopje towards making further moves towards settling the 18-year-old dispute.

“I am convinced that there is now real opportunity, provided there is enough political will from both sides,” Barroso said.

The two met in Brussels Wednesday afternoon, where they talked about the ongoing Athens-Skopje name row, that now remains the only obstacle in the way of the EU extending Macedonia a desired date for accession negotiations.

The next opportunity to give a date is 7 December, when member states meet under the auspices of the EU Council. Greece has set a solution to the row as a condition for extending a start date for negotiations

Gruevski once again urged Greece not to block his country at the December meeting, arguing that it would be better for a solution to the name dispute if Skopje is allowed to start accession talks and in parallel negotiates its name.

“Greece’s government will have the possibility to block us many times in the future. We are ready for discussion,” Gruevski said.