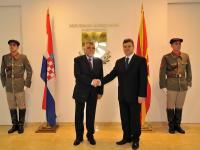 Croatia is nearing the end of its EU accession talks. Zagreb’s talks were stalled for almost a year when neighboring Slovenia blocked Croatia’s accession due to an unresolved bilateral border dispute. The two countries reached a deal earlier this year whereby their dispute would be settled via arbitration in return for Slovenia lifting its veto on Croatia’s accession to the EU.

“There are few modalities to bridge the impasse – the first option is to freeze the dispute until Macedonia achieves its foreign policy goals,” Mesic said, referring to Skopje’s top foreign policy priorities as NATO and EU membership.

In October the European Commission recommended member states give Macedonia a start date for EU accession talks. Member states meet on 7 December under the auspices of the EU Council. Greece has threatened to block any decision to give Skopje a start date pending a solution to the 18-year-old row.

Ivanov said he expects Macedonia to be given a date for launching EU accession talks on 7 December.

The ongoing UN sponsored bilateral talks for reaching a compromise solution have so far failed to reach a result. Macedonia refuses to change the name under Greek pressure and argues it its name is closely linked with its national identity and pride.