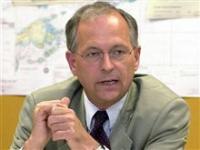 The former EU envoy for Kosovo, Wolfgang Ischinger, says Serbia should resolve its disagreements with Kocoso as a part of its EU accession process.

The German Ambassador said that Serbia knows about these conditions and there is a general acceptance to find a solution within the context of Serbia’s EU membership aspirations.

Ischinger added that he expects that in the near future Pristina and Belgrade will start discussions on finding a practical way to co-exist without raising fundamental status related issues.

“In the long term, both Serbia and Kosovo will enter the EU and at that moment all discussions on who owns which part of territory will be less relevant than it is today,” Ischinger said.

Ischinger said northern Kosovo ‘will be Kosovo’s territory, under one government. We are not interested to have a special situation for the north of Kosovo,” he concluded.

Post Views: 217
Previous Romanian Chamber of Deputies agrees ratification of Convention on Small Scale Border Traffic with Moldova
Next Rehn: Greece shall not be excluded from the euro zone